Why the Taiwanese captured a Soviet tanker


For some of the crew of the Soviet tanker “Tuapse”, the return home lasted almost 35 years.

On June 23, 1954, an event occurred which sent reverberations across the USSR. The Soviet tanker “Tuapse” had been captured in the international waters of the South China Sea. And it was not done by pirates, but by the Republic of China Navy itself. So how did little Taiwan come to rule on open conflict with one of the world’s major powers?

The Soviet Union and the Republic of China are not always enemies. In the second half of the 1930s, Moscow actively supported Chiang Kai-shek’s ruling party, the Kuomintang, which opposed Japanese aggression, sending it financial support, weapons, and military specialists.

In 1949, the Chinese People’s Liberation Army (PLA) drove Chiang Kai-shek’s supporters from the mainland to the island of Taiwan, but the latter did not resign itself to defeat. Securing the support of its American allies, the Kuomintang attempted to impose a naval blockade on the People’s Republic of China and stopped foreign freighters en route to the Communists.

Once their cargoes were confiscated, ships were generally allowed to continue on their way.

The Soviet ships were the only ones that Chiang Kai-shek dared not touch. This fear disappeared, however, in the spring of 1953, after the death of the “all-powerful leader” Stalin and the ensuing power struggle in the USSR.

The Soviet tanker “Tuapse”, which had left Odessa in May 1954, was on its way to Shanghai with ten thousand tons of aviation fuel for the PLA air force. When it almost reached its destination, it was intercepted by two Taiwanese destroyers.

Officer Cui Changling, who participated in the operation to capture the tanker, fled to mainland China some time later. “I could not help but wonder how it is that the command of Chiang Kai-shek decided to show such daring,” he said during questioning. “I quickly received a comprehensive response to this question from the captain. It happened when, in the early morning of June 23, we saw the ‘Tuapse’ and walked towards it. At that point, I was standing on the command deck and saw through my binoculars in the distance the silhouettes of two other ships and immediately reported it to the captain. He said the ships belonged to the US Navy. The captain said they had encountered the ‘Tuapse’ in the Bashi Canal and accompanied it to the pre – an organized capture site, giving the coordinates of the Soviet ship to the Kuomintang command. “

Chinese ships fired several warning shots, ordering the tanker to stop. An armed assault group came on board and took control of the ship. The radio room only had time to send home one message that the vessel had been seized. 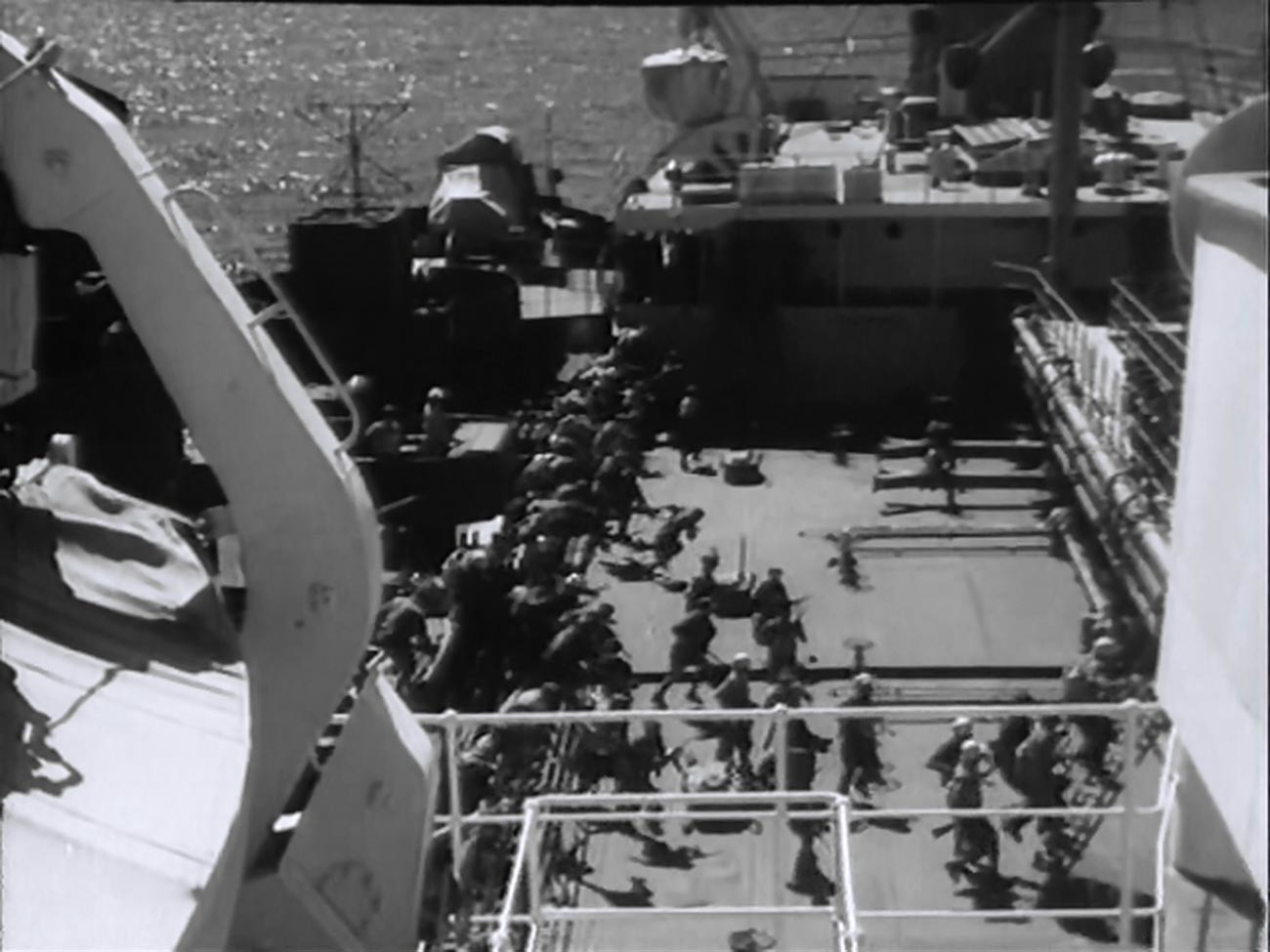 An image from the Soviet film “EA – Extraordinary Accident”, based on real events of the capture of the Soviet tanker “Tuapse”.

The “Tuapse” was brought to the Taiwanese port of Gaoxiong. There, according to Cui Changling, several US military advisers disguised as civilians came on board. They confiscated all the documents and carefully examined the tanker.

The Soviet Union immediately reacted to the incident. Moscow did not recognize the Taiwanese government and its protest note was sent directly to the United States. “It is perfectly obvious that the seizure of the Soviet tanker by a naval vessel in waters controlled by the United States Navy could only have been carried out by the United States Navy. As part of this attack on a Soviet merchant vessel on the high seas, the Soviet government expects the US government to take measures to ensure the immediate return of the ship, its cargo and its crew, “the note read. The text of the note was published in the Pravda newspaper on June 25, 1954. .

Since Chiang Kai-shek continued to hold the ship and her crew, the Soviet Union and a number of socialist bloc countries have stepped up diplomatic pressure, including at the UN Even Australia and New Zealand, who were friendly with the Americans, privately expressed concern that the incident could give the USSR a pretext to step up naval operations in the western part of the Pacific Ocean.

The fate of the crew

The US and Taiwanese special services were in no rush to respond to Moscow’s requests, however. They had their own plans for Soviet sailors.

The 49 crew members were divided into groups of 10 to 15 each and immediately isolated from each other. Every day, they were subjected to psychological brainwashing in order to get them to seek political asylum in the United States. The aim was to damage the image of the Soviet Union and show that people shied away from it at all times.

Sailors were given the status of prisoners of war, kept on starvation rations and subjected to beatings, or, conversely, attempts were made to bribe them with the promise of a comfortable and prosperous life in the West. At one point, they were even told that World War III was underway and, if they didn’t switch sides, they would simply be shot.

Only a year later, the Soviet Union succeeded, with the mediation of the French, in obtaining the release of 29 crew members, including the tanker’s captain, Vitaly Kalinin. Despite all the pressure they were subjected to, they categorically refused to sign anything. 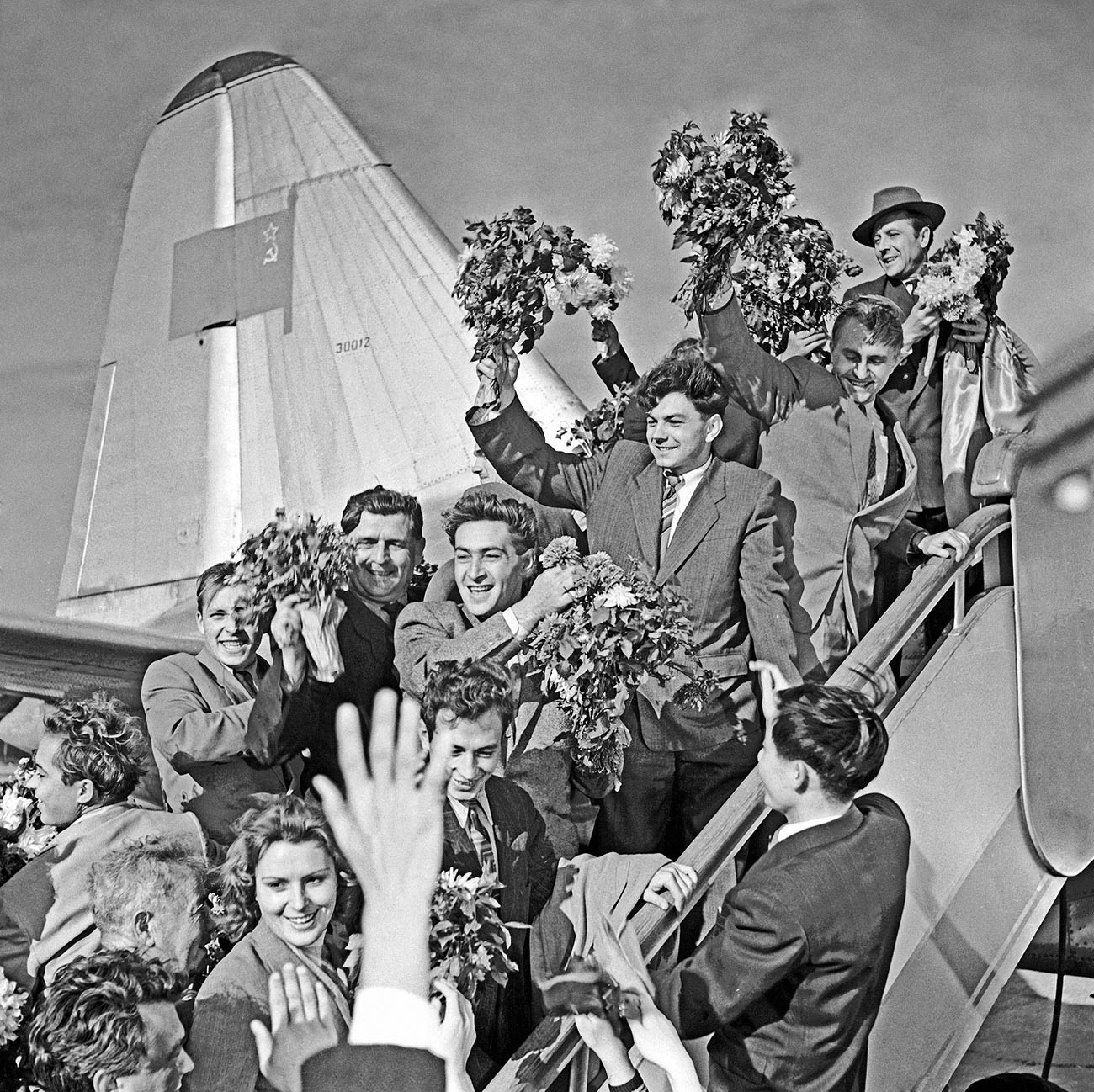 An image from the Soviet film “EA – Extraordinary Accident”, based on real events of the capture of the Soviet tanker “Tuapse”.

The freed men were greeted by a hero when they returned home. They were compensated for being prisoners, rewarded and getting good jobs on the ships. “There were times when we lost all hope of coming back. Above all, we were afraid of starving to death: everyone was so emaciated they looked like walking skeletons,” recalls Yury Boriskin.

A more melancholy fate awaited the 20 people who signed the asylum applications. Nine of them were taken to the United States, where two even broadcast criticisms of the Soviet system on the radio. Five decided to return home soon after, and in April 1956 fled to the Soviet embassy. At home, their welcome was discreet; they have been kept under surveillance and are no longer allowed to navigate on international routes. Nikolai Vaganov, one of those who had made radio broadcasts, was arrested (not immediately, but only in 1963), convicted of treason and sentenced to 10 years in prison.

The four who remained in the United States were sentenced to death in the Soviet Union in absentia. One of them – Mikhail Ivankov-Nikolov – went mad soon after, and the Americans themselves handed him over to the Soviets in 1959. At his home he was not shot, but placed in a hospital. psychiatric, where he spent 20 years.

Four other sailors who had signed asylum requests were able to leave Taiwan for Latin America in 1957 and, from there, return to the USSR. A large press conference was initially held for them, but they were later sentenced to terms of up to 15 years for treason.

Among the sailors who remained on the island, two died and another committed suicide. Four withdrew their signed asylum claims in the United States and were held in a local jail. After their release, they lived in a seaside settlement under the surveillance of the Taiwanese police. It was not until 34 years later, in 1988, that the Soviet consul in Singapore succeeded in having them repatriated.

The tanker “Tuapse” was never to see the shores of his house again. After serving in the Republic of China Navy under the new name of “Kuaiji”, she was sent for permanent mooring in the port of Kaohsiung, where she is to this day.